making your moves for you.

the gist of it

With a name derived from the Japanese word for stagehands, Kuroko is a prototype system of robots aimed at automating the movement of various objects within a space such as a theater, office, or home. Each object that needs to be mobile has a dedicated, reasonably inexpensive robot attached to its base. Together, this collection creates a powerful, coordinated network of nodes that a user can manipulate to a configuration of choice.

why we're doing this

Several hours of manpower are often needed trying to rearrange the chairs in a large auditorium, office, or restaurant at the end of a day. The cost of employing stagehands for a production company running several shows each weekend can often get prohibitively expensive. So we thought we'd make things that can replace manual labor for such tasks cheaply and accurately. Such a coordinated collection of robots can find application in several other fields as well. So, why wouldn't we do it? 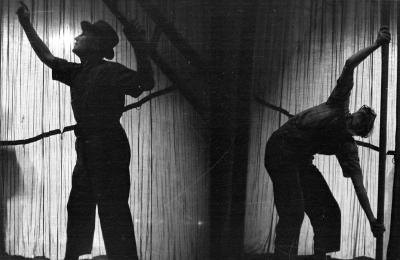 We're a group of seniors who are really excited to create Kuroko. We're having a blast while working, too. While Dhaval gets hungry unusually often and Alex and Taylor fight over code style, Nidhi plays pacifier and glues the whole team together. Clearly, we're a very balanced team.

We are using an iRobot Create, combined with a Raspberry Pi, to move the object. When a user manipulates the set-up on a web-app, the signal is sent to a central server over Wifi, which forwards this to processors equipped with Edimax WiFi modules on the appropriate robots. Each node is clever enough to maneuver without continuously contacting the server. On reaching their destinations, they relay a message of success back to the server.

It turns out we're actually quite unique in terms of our vision of applying this concept to several possible use cases. Considering each one individually, there are some specialists that exist in the market.

Creative Conners is a company that specializes in scenic automation for plays, but they provide extremely specialized equipment without the flexibility Kuroko offers, and begin at a hefty licensing fee of $995.

Other than that, our primary competitor is manual labor, because the problems of re-arrangement of objects, such as chairs in offices or concert halls, haven't quite been automated at all. To illustrate the potential of replacing repetitive work with Kuroko, take a look at the time lapse of an ordinary 120 hours at the Interlochen Academy's Kresge auditorium.

Visit our tumblr pageand keep up.